Java has often been compared with Erlang by Erlang advocates, who emphasize its advantage over Java in thread creating and message passing. Some even claim that Erlang can be Java successor in concurrent programming. Of course such comparisons and benchmarks have some value, but the truth is that Erlang has never been, and never will be, Java competitor. The reason for this is simple, and was perfectly explained by Dennis Byrne in his article "Integrating Java and Erlang":


Java and Erlang are not mutually exclusive, they complement each other. I personally have learned to embrace both because very few complex business problems can be modeled exclusively from an object oriented or functional paradigm.


Integration and interoperability are now the key words that make modern IT business go round. It is also understood very well by the Erlang team, who created Jinterface - a set of Java classes for communicating with Erlang.

Jinterface is also the key element that allowed me to build a highly scalable Jabber cluster based on ejabberd as XMPP server and HBase distributed database as a storage. Ejabberd is a distributed Jabber server written in Erlang, but unfortunately Erlang native storage, Mnesia, can't handle large amount of data. To overcome this limitation, ejabberd provides ODBC drivers for MySQL, MS SQL and PostgreSQL, but it's only a partial solution to the scalability problem. First, the whole ejabberd cluster still uses a single database instance as data storage, and second, user sessions are still kept in Mnesia. 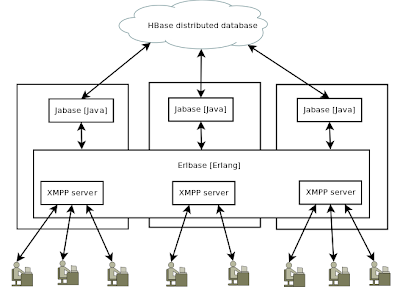 The source code of Jabase has been released under GPL and the project website contains a manual how to compile and set up a simple Jabber cluster based on Jabase. However, technical support is served exclusively by Division-by-Zero, for which I built this software. If you have any questions or are interested in using Jabase in your company, please contact Division-by-Zero.

Edit: You can get the original code here. Keep in mind that it supports ejabberd-2.0.3 and you may need to adjust the source code to make it work with the latest version of ejabberd.
Posted by kklis at 20:53

This is really, really cool! I think the Hadoop ecosystem is a prime place to try out some functional programming, so I'm excited to see where it all leads.

Is there any company or case-study that uses jabase?

their domain is for sale now.
project gone!

No their domain is for sale now.

The site is back on-line and the project page is available again. Enjoy it!

Is this code still alive anywhere? The link is down again.

I wish the website was working so I can get some help...please help. I'm interested in building IM app.